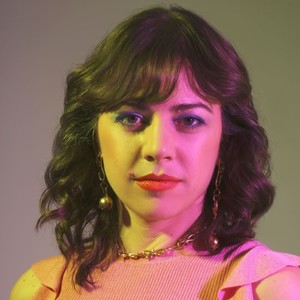 Mezzo-soprano Deniz Uzun has been praised for her “phenomenal, concise and clear voice” (Süddeutsche Zeitung), “great projection” (Bachtrack) and commended for the “ warmth and poise” of her sound (Seen and Heard International).

Her 2021/22 season includes several exciting role debuts such as Dido/Dido and Aeneas at the Teatro Massimo in Palermo, the title roles in Zanetto by Mascagni in concert version touring in Switzerland and Carmen at the Landestheater Salzburg under the direction of Jacopo Spirei and under the baton of Gabriel Venzago. Passionate about Russian repertoire, Deniz performs Olga in Eugene Onegin twice this season: at the Komische Oper Berlin in a Barrie Kosky production, and in concert with the Dallas Symphony Orchestra under the baton of Fabio Luisi. Deniz was also one of the nine finalists of the Paris Opera Competition, and performed opera scenes at Opéra national de Paris in the final of the competition.

At the start of the 2022/23 season she joins the ensemble of the Komische Oper Berlin, where she will make her debut as Dorabella/Così fan tutte, Una Donna/Intolleranza 1960, Meg Page/Falstaff and Third Lady/Magic Flute. Guest engagements lead her to house and role debuts as Orlofsky/Die Fledermaus at Teatro Carlo Felice in Genova under the baton of Fabio Luisi and as Waltraute/ Götterdämmerung at the Wagner days 2023 at Müpa Budapest and she is proudly returning to Opernhaus Zürich as Luigia/Viva La Mamma.

Future seasons include a return in exciting repertoire to Dallas Symphony Orchestra and her debut with Cleveland Orchestra.

The young mezzo-soprano was an ensemble member of Opernhaus Zürich from the 2016/17 to the 2020/21 season, where she appeared in title roles as Hansel/Hansel und Gretel, L’Enfant/L’Enfant et les sortilèges, Zelim/La verità in cimento, Jacob/Gold! and Ronja/Ronja Räubertochter, and in supporting roles as Lucilla/La scala di seta, Ino/Semele, Sonetka/Lady Macbeth von Mzensk, Krista/Věc Makropulos, Page/Salome, Alisa/Lucia di Lammermoor and she performed Rachmaninov songs in the ballet Anna Karenina. Because of the Covid-pandemic her performances as Emilia/Otello, Alto/Johannespassion, Olga/Eugene Onegin and Bradamante/Alcina were cancelled. As part of the Zurich Opera House's alternative program due to the pandemic, she gave three recitals in the 2020/21 season titled “Opera goes Folk“ with pianist Yulia Levin.

Deniz has performed Florence Pike/Albert Herring, Sandmann/Hansel and Gretel, Nun/Fiery Angel, Cleaning Lady/Věc Makropulos and Alisa/Lucia di Lammermoor at the Bayerische Staatsoper as part of the Young Artist Program, a Liederabend with Tobias Truniger at Stiftung Mozarteum in Salzburg, Rachmaninov songs as part of the ballet Anna Karenina at Tel Aviv Opera, Lola/Cavalleria Rusticana at the Jurmala Music Festival in Latvia, Isabella/L’Italiana in Algeri and Ruggiero/Alcina and Gertrude/Hansel and Gretel with Indiana University Opera and Ballet, Annina/La Traviata and Isabella/ L’Italiana in Algeri for children at Baden Baden Festspielhaus, Beethoven 9th Symphony with Danish Radio Symphony Orchestra and Cyprus Symphony Orchestra, Page/Salome in concert with Dallas Symphony Orchestra and 3rd Maid/Elektra at Salzburger Festspiele. Her appearance as Ganymed/Die Schöne Galathee with the Bavarian Rundfunk Orchestra was postponed to October 2022 because of the pandemic.

She has been working with Oylun Erdayi on her vocal development since 2013 and since 2020 with Sherman Lowe.