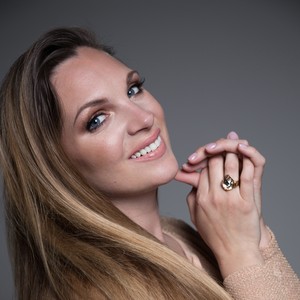 The Czech mezzo-soprano Ester Pavlu graduated from the Academy of Performing Arts Prague and perfected her singing skills in masterclasses with Aprile Millo, José Cura and Peter Dvorsky. She has won several international singing competitions, including the Antonín Dvořák Singing Competition, the Concours International de Belcanto Vincenzo Bellini and the Beno Blachut Award.

In 2017 Ester Pavlu was discovered by Jose Cura at his masterclass and was invited to sing with him at his Prague concert and then engaged as Fenena in Verdi's Nabucco at the National Theatre in Prague.

Consequently she made her debut as Laura in C. M. Weber's Die drei Pintos at the Prague State Opera. Ester Pavlu also celebrated her first successes as Donna Elvira in Mozart's Don Giovanni at the Ständetheater in Prague or as Foreign Princess in Dvořák's Rusalka at the Theater Pilsen. Further engagements brought her to the Grand Théâtre du Puy du Fou and the Teatro Lirico di Cagliari.

One of her remarkable concert appearances is the Old Lady in the world premiere of Bohuslav Martinů’s What Men Live By under the direction of Jiří Bělohlávek. The production was nominated for the International Opera Award 2015. The recording of the work was then awarded the Czech Music Prize - Anděl - for the best classical recording.

In the current season, Ester Pavlu will sing the title role in Carmen (Bizet) and Santuzza (Cavalleria Rusticana) at Prague National Theatre.