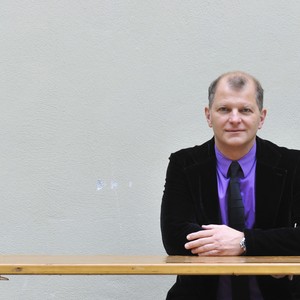 Martin Kušej, born in Austria, in 1961, studied German Literature and Sports Science in Graz before going on to study Directing at the University for Music and Performing Arts in Graz. In 1987, he presented his staging of Karl Schönherr’s “It” at the State Theatre in Graz, where he went on to direct other important works such as “The Sinking of the Titanic” by Enzensberger, “Tage des Königs” by Rosei and “Der Traum ein Leben” by Grillparzer. He also worked on productions in Slovenia at the experimental theatre GLEJ, the State Theatre in Ljubljana and at “maledinsko”. In 1990, he founded the theatre company “my friend martin” with Stage Designer Martin Zehetgruber and Dramatic Advisor Sylvia Brandl. Their projects were performed at “steierischer herbst” in Graz, amongst other places. In Graz, he staged his own production entitled “Tode” (“Death”) in three truck containers. In 1992, he worked in Germany for the first time, premiering Thomas Strittmatter’s “Irrlichter – Schrittmacher” at the Residenztheater.

From 1993 onwards, he worked as Director of Schauspiel Stuttgart, where he staged Grabbe’s “Herzog Theodor von Gothland”, Goethe’s “Clavio”, Horváth’s “L’Inconnue de la Seine”, Sarah Kane’s “Cleansed/Gesäubert”, which was invited to the Festival Theaterformen in Hanover, as well as his first opera, Henry Purcell’s “King Arthur” in 1996. He worked at the Burgtheater in Vienna where he put on productions of “Weh dem, der lügt!” in 1999, “Glaube und Heimat” in 2001 and “Glaube Liebe Hoffnung” in 2002, and at the Thalia Theater in Hamburg with “Geschichten aus Dem Wiener Wald” in 1998 and “Gespenstersonate“ in 2000.

He also continued to work on operas: “Salome” by Richard Strauss, “The Magic Flute” by Mozart and “Genoveva” by Robert Schumann at the Zurich Opera House, “Don Giovanni” and “La Clemenza di Tito” by Mozart at Salzburg Festival, Bizet’s “Carmen” at the Berlin State Opera and “Lady Macbeth von Mtsensk District” by Shostakovich at the Nederlandse Opera in Amsterdam. In 2005/06, Kušej was appointed Director of Acting at the Salzburg Festival, where he presented co-productions with the Burgtheater of “König Ottokars Glück und Ende” by Grillparzer as well as “Höllenangst” by Johann Nepomuk Nestroy. In 2008, he was asked to open the season at the Bavarian State Opera with Verdi’s “Macbeth”, where he also directed Dvořák’s “Rusalka” in 2010 and Verdi’s “La Forza del Destino” in 2016.

In 2007, he returned to the Residenztheater to stage “Woyzeck” by Georg Büchner. At the Burgtheaterhe worked on “Der Weibsteufel” by Karl Schönherr in 2008 and on “Das Interview”, based on a film by Theo van Gogh at the Theater am Neumarkt in Zurich a year later. In 2010, the production was invited to Autorentheatertage in Berlin.In 2010, he put on a production of Roland Schimmelpfennig’s “Peggy Pickit sieht das Gesicht Gottes” at the Deutsches Theater in Berlin. Kušej has been rewarded for his work as a director with various awards: He has been invited to the Theatertreffen Berlin with three of his productions.

In 2011 Martin Kušej was appointed director of Residenztheater Munich. Since then he has directed many productions such as Schnitzler’s “Das weite Land”, Ibsen’s “Hedda Gabler”, Mamet’s “The anarchist”, Krleža’s “In Agonie”, Goethe's “Faust”, Albees “Who’s Afraid of Virginia Woolf?” as well as “Phädras Nacht”, a project by Martin Kušej and Albert Ostermaier. He has also been awarded two Nestroy Prizes as well as the Faust Prize in 2012 for his production of “The Bitter Tears of Petra von Kant” by Rainer Werner Fassbinder. He also continued to work internationally including his staging of Mozart’s “Idomeneo” at the Royal Opera House in London and “Die Entführung aus dem Serail” at the Festival d’Aix en Provence. During the season of 2017/18, he presented Ayad Akthar’s “Disgraced” at the Teatro Stabile in Turin. In May 2018, he will stage Schiller’s “Don Karlos” at the Residenztheater.

He will be Artistic Director at the Burgtheater in Vienna starting in the season of 2019/20.