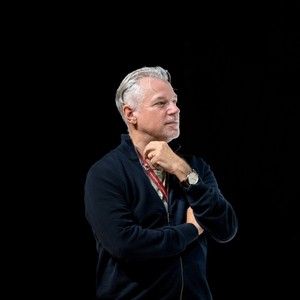 Christof Loy is one of the most sought after directors of his generation. His finely detailed productions have won him numerous awards and honours.

In addition to his production activities, he worked as a professor and head of the degree programme in directing at the University for Music and Performing Arts in Frankfurt from 2006 to 2008. Loy's student years were multifaceted and varied and provided a broad foundation for his career in theatre. He studied directing at the Folkwang University of Arts in his home town of Essen, and philosophy, art history and Italian philology at the University of Munich.

Since 1990, he has worked as a freelance director. Initially, Loy worked in both opera and theatre, including in Stuttgart (The Magic Flute, Children of the Sun, Phaedra and Triumph of Love) and at the Munich Kammerspiele (Closer by Patrick Marber).

At the end of the nineties, the focus of his work shifted increasingly towards opera, where he produced fruitful reinterpretations drawing on his theatrical education and psychological perspective.

Important locations for his work include the Deutsche Oper am Rhein (Düsseldorf-Duisburg), the Theater Bremen, the Hamburg State Opera, the Théâtre de la Monnaie in Brussels, the Grand Théâtre de Genève and the Oper Frankfurt. He regularly staged productions at the Bavarian State Opera (Roberto Devereux and Lucrezia Borgia with Edita Gruberova in the leading female roles, as well as Saul and Henze's The Bassarids and recently Nozze di Figaro) and at the Salzburg Festival (Armida, Theodora and Woman without a Shadow).

Further works led him to the Deutsche Oper Berlin (Jenufa, Falstaff and Das Wunder der Heliane), to the Glyndebourne Festival (Iphigénie en Aulide), to the Theater Basel (Der Sandmann and Daphne), to Copenhagen (Lucio Silla), to Gothenburg (Arabella) and to the Schauspielhaus Zürich (Der Tausch by Claudel and the world premiere Weiter träumen by Thomas Jonigk).

His most recent works include Tosca in Helsinki, Tannhäuser in Amsterdam and Capriccio in Madrid, Der ferne Klang in Stockholm, Don Pasquale in Zürich, Eugen Onegin in Oslo and Così fan tutte at Salzburger Festspiele.